This morning I started writing a blog post about my fears around the B.C. government reopening our province and COVID-19 and getting sick and all that crap that we’ve been hearing about non-stop and I wrote and wrote and was finally like, “no. I just can’t. I’m going to write about the CATS movie instead.” Because you know, it’s equally crazy but a lot more “entertaining” and it’s fresh in my mind and it seems like somehow an appropriate time to write about it.

Last night my cousin, Melissa (a filmmaker in Western Massachusetts), and I finally decided to sit down on our respective couches across the continent, drink wine and watch the catnip-induced movie version of CATS. I had a lot of knowledge of what to expect going into this viewing. I’d listened to at least three comedy podcast reviews of the movie, read numerous hysterical articles about it and watched the trailer at least 10 times in order to make sense of what I was seeing. I figured that watching it would help to answer some of the questions I’d had after consuming all that media. Guys, I have news for you—it didn’t.

My aunt recently talked about the exhaustion people are feeling from Zoom meetings with colleagues, students, family and friends and the cognitive dissonance that it can cause in our minds which are being tricked into thinking they’re getting socialization but simultaneously realizing that they’re also not really getting the social connection they need. Maybe I should just stop right here because that pretty much sums up what it’s like to watch Tom Hooper’s CATS. Tom, oh Tom. Why? I’m not sure Tom has ever seen a cat, or a human for that matter. Because the cats don’t really look or act like cats and yet they don’t really look or act like humans so your brain is in a constant state of trying to make sense of what it’s seeing but it can’t and all you can do is sit there baffled, sort of amused, slightly entertained, dazzled and wanting more.

You’d think that perhaps the plot would help you move forward in this universe and start to understand what a jellicle cat really is, the nature of cat reality and why anyone would want to float off to the Heavy Side Layer (until I wrote this I thought it was the heavy side LAIR, which makes way more sense to me but then I forgot I was writing about CATS, which makes no sense. My bad) in an air balloon that looks like it was put together by actual cats, like the furry kind that are approximately like 10 inches tall, weight about 15 pounds, hunt mice and purr. Yes, Tom Hooper I’m talking to you. This is a cat. Also, in case you need more info here’s a Wikipedia entry on cats. 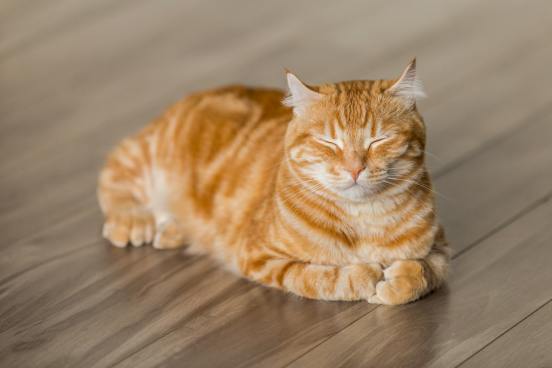 This is a cat.

I’d like to point out here that CATS was the first musical I ever saw on Broadway when I was about six years old and I was enthralled. Although I’m a dog lover at heart I adore all animals so to see a musical all about adults pretending to be cats was kind of magic. The best part was when one of the dancers pranced up to me and pretended to be scared of the stuffed dog I held on my lap. I knew right there and then that I loved musical theatre. The dancers were incredible. The songs seemed cool at the time and it was just silly, animal fun. Which is essentially the charm of the musical and possibly why it lasted so long on Broadway. The performers know that what they’re doing is ridiculous, the audience pretty much knows it too but when you’re there watching it there is this mutual understanding that for the next couple of hours you’re just going to let it happen.

Somehow in the CATS movie this is missing entirely. What could have been a kitchy, camp, quirky romp that would have a cult following took itself so seriously that apparently they even thought it was okay not to CG out the snot that ran down poor Jennifer Hudson’s face as she gave 150% effort in her performance of “Memory” as Grizabella the prostitute cat. I’m trying to figure out how many people this must have gone through who were like, “yep, that looks fine to me. We want it to be REAL and RAW. Yes, leave the snot. Leave the snot. Make sure her face looks like an alien was trying to draw a cat when they’d never seen one, but at least the snot will be real.”

There were so many baffling decisions made in this movie that, as Melissa said, “the movie feels simultaneously like the laziest movie ever made and the most meticulously made movie of all time.” They spent SO much time making the cat ears move when cats don’t even move their ears that way. They spent months and months working on the individual pieces of fur on each costume and yet ignored the fact that none of their bodies look like any kind of creature I’ve ever seen.

The movie is about as consistent as Trump on twitter, and features some cats in shoes, and some cats “barefoot”. Some cats with fur coats (WTF?) and some cats “naked”. The creepiest part has to be when Rebel Wilson’s character, Jennyanydots, unzips her skin entirely and is wearing a vest and costume underneath. Hooper referred to his decision to allow Rebel’s feline alter ego to unzip her own skin as his “tongue-in-cheek way of referencing that [he’s] using digital fur as clothing”. Um, dude. NO. They’re supposed to be cats. Can you imagine if cats were playing humans and unzipped their human skin suit to reveal a cat wearing a top hat and tap shoes? Okay, now I’m just getting myself confused, which is pretty much my state of mind the entire hour and fifty minutes of the movie last night.

There is also absolutely no sense of size, so just put that aside right at the beginning and forget about the world as you know it. Spoons are sometimes enormous and then the cat is tiny and the next moment the cat is bigger than a tower and then a table is tiny. You just have to forget about the laws of nature or reality and you’ll be just fine.

Okay, let me step back and name a few good things here, because it isn’t ALL bad. That’s the worst part. Hear me out. As Melissa said, “it just wasn’t…weird enough.” She totally nailed it. If Hooper had really and truly leaned in, the movie could have been a loopy weird insanity that even Mad Max/Babe/Witches of Eastwick director George Miller might have been proud of. In fact, now I’m kind of sad that George Miller didn’t direct CATS because then it really would have been like the most intense drug trip you’ve ever experienced but also really good at the same time. This could have been CATS, but instead it was too earnest, spent too long in the uncanny valley of our minds and wanted so bad to be an epic hit.

Oh wait, I was supposed to say some good things about CATS. Sorry, I forgot. My mind is still pretty messed up from last night. Alright, let’s see, some of the dancing is great! When the dancers actually get to dance for a moment, they’re quite spectacular but it never lasts long. Jennifer Hudson really does rock ‘Memory’, Mr. Mistoffelees is actually pretty sweet, though you aren’t sure why Victoria is suppose to be his love interest, and the scene with Mungojerrie and Rumpelteazer actually gets close to feeling like what you think the movie should have felt like the whole time. The actors are all TOTALLY committed to their roles and doing their darndest even if they had no idea how it would turn out. It’s entertaining—sort of?

I can only imagine that all the big names in it—from Dame Judy Dench (who looks so horrendous as Old Deuteronomy that I can only hope she never had to watch herself in this), Sir Ian McKellan (as the drunkest, most pathetic and sad looking version of Old Gus the derelict theatre cat), Idris Elba (holy shit, someone tell him he’s in a cat movie please), and prima ballerina Francesca Hayward (who may never make another movie again after seeing this), and so many others—that they actually thought they were a stage version and at the end Hooper was like, “oops, forgot to tell you guys that we’re going to CG the hell out of everything we just did and make it look as creepy as possible and all your performances will seem overtly sexual. Gotcha!”

Because yes, ALL the performances are overtly sexual and the number of implied cat orgies boggles the mind. Except, and this is a big exception—for the cat that was SUPPOSED TO BE OVERTLY SEXUAL. Taylor Swift makes her cameo as Bombalurina, who is supposed to be sexily re-introducing Macavity (Idris Elba) but her singing is so awful (and yes, she’s an ACTUAL SINGER), her dancing is so off putting and she is about as sexual as Old Gus the derelict theatre cat (actually sorry, Sir Ian, you are more sexual than her when you give Dame Judy the eyes in one scene) using a litter box.

I’d like to take a minute here to describe the plot of CATS to you—cat gets thrown into ground in sack by …humans? Cats sing about being jellicle cats, cat intro, cat intro, something about the jellicle ball and the heavy side lair, completely shun Grizabella for being a “glamour” aka “prostitute” cat even though they are all definitely sleeping with everyone, something about Macavity being evil and making cats disappear, cat intros, Mr. Mistoffelees getting sung at repeatedly until it makes him magic (apparently that’s all it takes), Grizabella being redeemed because she really rocked singing ‘Memory’, her being the secret protagonist all along and us forgetting about Victoria, the prima ballerina who never really got a solo dance (WHY?? WE WANT TO SEE HER DANCE MORE!) Macavity falls off the air balloon and I guess is foiled? And then…and then, Dame Judy sings about how we just watched a musical about what cats are and the conclusion is—they’re NOT dogs. I’m not even joking. That’s how the movie ends. I’m really glad she clarified that for us.

Guys, don’t get me wrong. I’m really glad I watched this movie, especially with my hilarious filmmaker cousin who could mock it and analyze it so very well and I highly recommend watching it, if only because I don’t want to be the only one with Judy Dench as Old Deutoronomy nighmares for the rest of my life. 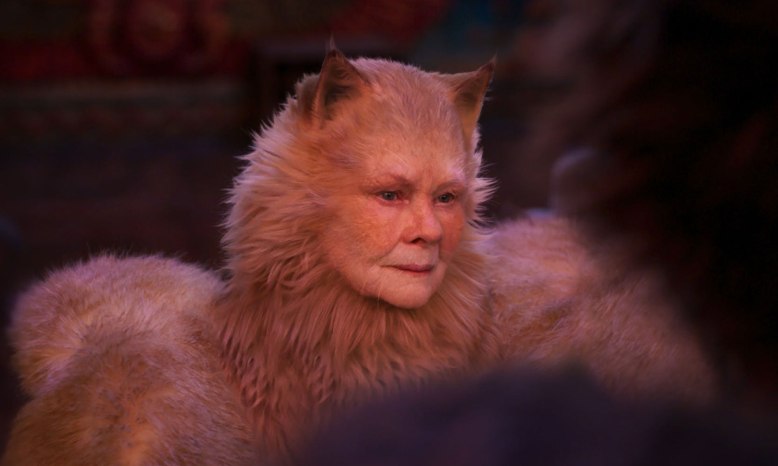 Here are some fantastic links to podcast reviews and articles that you might enjoy, whether or not you’ve watched the movie.