I used to watch romantic comedies like they were going out of style. My female friends and I had massive collections of DVDs (okay, okay they started out as VHS) and inevitably 80% of them were romcoms featuring your typical boy-meets-girl, boy and girl hate each other, boy and girl grow to love each other, boy and girl finally get together in climactic moment theme to them. There were twists here and there, some were done better than others, many still have a sentimental place in my heart (I’m a sucker for ‘Ever After’ and ‘French Kiss’), but at the end of the day the messages they sent were the same – girls you are not complete without a man and when you finally find him your life will be perfect. I just laughed out loud reading this. Like for reals.

In the last decade my feelings about romcoms gradually changed to the point that now I can barely stand to watch the first ten minutes of one. As my understanding of movies, TV, storytelling, and women in the world has evolved and matured I came to realize that most of these films were written by men, with absolutely no concern for the authentic feelings and desires of real women. I don’t blame these men. They have been just as conditioned as we have to think of romance and love in these odd, male-centric, marriage-is-the-only-real-goal, chase-her-until-you-get-her ways. This is so messed up, people. Real love is messy, full of ups and downs, takes dedication, understanding, forgiveness, honesty, a daily commitment to it and the knowledge that no, it’s not like it is in the movies. It also involves real human beings who come with their own and often heavy sets of baggage. Don’t get me wrong, falling in love is great. I certainly love it. Those feelings of infatuation in the early stages of a relationship are magical and powerful and it’s no wonder filmmakers want to focus on them. But I finally reached a point where I was just done. I was tired of seeing women portrayed as needy or marriage crazy or one dimensional. I was tired of seeing men being glorified for what can only be described as stalker-like and controlling behaviour in order to woo a woman. No, it’s not okay to pester or harass a woman continually until she says yes. No means no. Listen to her the first time and leave her alone.

Cinema and TV is slowly changing and I’m thrilled to see more and more powerful movies and TV shows about complex female characters, made by equally complex female directors and filmmakers, but sadly this is still a very small percentage of what is out there for general consumption. I realized recently that I have been so programmed to see women one way on screen that often I don’t even notice when a show or movie is being sexist. Zeke and I watched a film the other day and I remember thinking, “yah, the main female character was pretty strong, that’s an improvement,” and he then proceeded to point out all the examples of how her only role in the movie was to support the male protagonist and how we still have so far to go. I love it when my feminist boyfriend is even more feminist than me.

I could go on and on about all the issues with how women are portrayed on screen, the serious lack of female filmmakers and how romcoms create an unrealistic, and often deeply problematic view of relationships and love, but the point of this post is to take a look at a show that is turning the tide for women.

Zeke and I heard about the HBO mini-series, Big Little Lies, online and were intrigued enough to check it out, but it wasn’t until we had watched a few episodes that I realized what I was seeing on screen – a show about real women with real problems. Men for once were the secondary characters. The only time I remember seeing this in recent memory was with the 2008 remake of The Women which takes this concept to the extreme and takes all men out of the film entirely, until the very end – spoiler alert – when a baby boy is born. This is the one and only appearance by a male character in the film. This film was a beautiful attempt at doing what Big Little Lies does so well, gives women a place on screen to discuss their lives and their challenges without a man getting in the way. 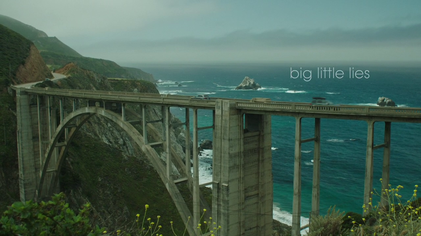 The show stars an amazing cast of top notch actors – Nicole Kidman, Reese Witherspoon, Laura Dern and Shailene Woodly – in the gorgeous setting of Monterey, California. Three of the characters live in stunning seaside mansions, have more money than they likely know what to do with and by all standards live lives of utter luxury. We approached the show with a bit of apprehension since the last thing we felt like watching was a melodramatic show about privileged white rich people, but there’s an important reason for this choice. The stunning backdrop and appearance of wealth and success hides deeply unsettled, turbulent and often disturbing lives and relationships underneath. The women come together each day at their children’s elementary school and it’s through these interactions that we get to know them and their personal struggles. Some of the women are powerful business women who are tired of being looked down on for being working moms and some are stay at home moms who hate the condescension of working moms. Some are single parents, some are remarried. But at the heart of the matter is the fact that they are all women in a world that doesn’t make it easy to be a woman. They are trying to find their place in society, trying to recover from trauma or escape it and simply trying to come to terms with what it means to be a mother, a wife, a woman, a friend, a lover and so much more. The mystery in the show is secondary to the rich emotion and delicate intricacies of these womens’ lives. In fact sometimes I felt like the murder mystery element, or rather the side characters’ interviews about it throughout, took away from the show at times, but the mystery itself did move the plot forward towards the story’s emotionally intense conclusion.

The show delves deep into issues that are often hard to watch, but also essential to examine. No pain or trauma is presented without a very real reason for putting it there. It takes emotional satisfaction to a whole other level. It wasn’t just great storytelling, it was like a giant weight lifted off my shoulders in the process of watching it unfold. To see some of my own emotions and experiences as a woman dealt with so beautifully and profoundly was an eye opening experience for me. For the first time I could see the future of TV and film in a way that made me hopeful for women. That sounds a bit extreme, but after a lifetime of putting up with filmmakers just not getting it quite right, I finally saw something that was different and promised change. This is the power of art. I am so grateful that this show exists in the world.